At least 80 had been killed 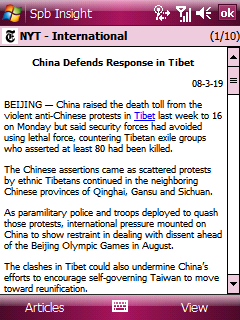 China Defends Response in Tibet
08-3-19
BEIJING — China raised the death toll from the violent anti-Chinese protests in Tibet last week to 16 on Monday but said security forces had avoided using lethal force, countering Tibetan exile groups who asserted at least 80 had been killed.
The Chinese assertions came as scattered protests by ethnic Tibetans continued in the neighboring Chinese provinces of Qinghai, Gansu and Sichuan.
As paramilitary police and troops deployed to quash those protests, international pressure mounted on China to show restraint in dealing with dissent ahead of the Beijing Olympic Games in August.
The clashes in Tibet could also undermine China’s efforts to encourage self-governing Taiwan to move toward reunification.
In the final days of campaigning ahead of the island’s presidential election Saturday, both major political parties condemned Beijing’s suppression of protests in Tibet.
Chinese officials said the Tibetan regional capital, Lhasa, was quiet Monday after the biggest anti-government protests in almost two decades turned violent Friday.
Earlier, state media reported that 10 people had been killed when Tibetans went on a rampage attacking ethnic Chinese and destroying their shops and property.
The senior Chinese political leader in Tibet, Qiangba Puncog, said at a news conference in Beijing on Monday that security forces had used only water cannon and tear gas to disperse protesters in Lhasa.
He said 13 of those killed in the protests were “innocent civilians” attacked by the mob.
Another three Tibetans had died when they jumped from the roof of a building after refusing to surrender to police, he said.
Mr. Puncog, an ethnic Tibetan, said supporters of Tibet’s exiled spiritual leader, the Dalai Lama, had organized the unrest in an effort to generate publicity during the Olympics.
“Calm has returned to Lhasa, and society has returned to a state of normality,” The Associated Press quoted him as saying.
“This was organized, premeditated, masterminded and incited by the Dalai clique, and it was created under the collusion of Tibet independence separatist forces both inside and outside of China,” he was reported by the news agency to have said. “Those activities were aimed at splitting the country, were aimed at undermining ethnic community and undermining social harmony and stability in Tibet.”
The Dalai Lama on Sunday accused China of waging “cultural genocide” in Tibet and called for an international inquiry into the suppression of the protests.
From the headquarters of the Tibetan government in exile in Dharamsala, India, he said Tibetans had the right to peaceful protest.
There has been no independent corroboration of either the Chinese or Tibetan exile version of the casualties and damge from the protests in Tibet.
The Chinese authorities have barred foreign journalists from Tibet and access for other foreigners including tourists has been “temporarily” suspended, according to government officials.
Footage of Lhasa streets shown by Hong Kong television over the weekend showed a heavy Chinese military and police presence on streets still covered with debris. The Chinese authorities have set a deadline of midnight Monday for those who took part in the demonstrations to give themselves up or face harsh penalties.
Journalists and photographers attempting to cover the outlying protests said they had been taken into “protective detention” and prevented from approaching sensitive areas.
For China, the timing of the unrest in Tibet has drawn unwelcome attention to some of the longstanding tensions in the country at a time when the ruling Communist Party is planning a show of unity and harmony during the Olympics.
China says Tibet has been part of its territory for hundreds of years but Beijing has exerted full control only since 1950, when Communist troops invaded the region.
The catalyst for last week’s violence was a series of pro-independence protests led by Buddhist monks to mark the 49th anniversary of a failed uprising that forced the Dalai Lama into exile.
Now China is under international pressure to avoid further bloodshed or a heavy-handed crackdown in Tibet.
The president of the International Olympic Committee, Jacques Rogge, said on Sunday the Olympic body was very concerned about the situation in Tibet.
“The IOC hopes that there can be an appeasement as soon as possible to this situation, and I also want to offer our condolences to the relatives of those people who lost their lives,” The Associated Press reported Rogge saying. Earlier, Rogge had ruled out a boycott of the games because it would only penalize the competitors.
Australia, the United States, Japan and Europe have also called on Beijing to exercise restraint.
“With the approach of the Olympic Games, which ought to be a great show of fraternity, France would like to draw the attention of the Chinese authorities to the importance of respecting human rights,” the French Foreign Ministry said in a statement.
In Taiwan, the pro-independence ruling party of outgoing President Chen Shui-bian seized on the violence in Tibet and China’s threat of harsh measures against protesters as a warning of what could lie in store for the island if it was reunited with the mainland.
The front-runner in the presidential race, the Nationalist Party candidate Ma Ying-jeou, has campaigned strongly for improved ties with China, but he also called for an end to the “violence used by Beijing authorities.”